Ari Honarvar is an award-winning writer, speaker, and artist dedicated to building bridges between the arts, social justice, and well-being. Her words have appeared in Parents, Teen Vogue, The Guardian, Washington Post, Newsweek, New York Times, and elsewhere. Her flash-fiction stories are featured in The Nature of Cities anthologies, A Flash of Silver Green (2nd place Award, 2019), and City in a Wild Garden (1st Place Award, 2021). 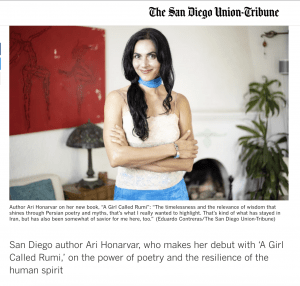 Ari’s critically acclaimed debut novel, A Girl Called Rumi (2021, Forest Ave. Press), is a BookFest Award Winner, a Nautilus Award Winner, a Locus Award Finalist, a Foreword INDIES Award Finalist. and a Kirkus Reviews best books of 2022. She is the author and illustrator of Rumi’s Gift  (2018, Schiffer Publishing), featuring an oracle deck and an accompanying book of Ari’s original translations, meditations, stories, and the artistic collaboration with the renowned illustrator, Carmen Costello,

As part of her continuous efforts to build poetry and musical bridges across war-torn and conflict-ridden borders, Ari is the Iranian Musical Ambassador of Peace, dancing with refugees and conducting Resilience through Joy workshops for refugees and volunteers on either side of the U.S.-Mexico border and Europe. Due to the success of the program, she is now offering a customized program to schools, nonprofits, and corporations committed to social justice. 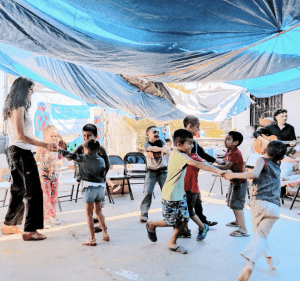 Her recent Washington Post op-ed on Arranged Friendships has elicited an overwhelming response from all over the world. She has been interviewed by different podcasts and publications on the subject including The Atlantic’s Friendship Files and is now helping facilitate other arranged friendship groups.

An acclaimed speaker, Ari presents at conferences, universities, nonprofits, and other venues. She is a mentor at the College of Graduate and Postdoctoral studies at The University of Saskatchewan. As part of the Journalist in the Classroom program of Solution Journalism Network, she visits campuses across the US. 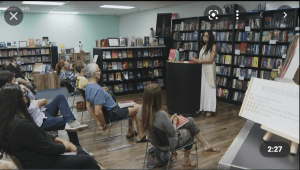 In live performances, she collaborates with musicians of different cultures and presents a dynamic program including poems, stories, and music. Ari is the founder of the Drop Poems Not Bombs project, sending musical love letters from American musicians to the people of Iran, and Dance for Freedom, a project garnering global support for Iranian protesters.

To go directly to the store, click on rumiwithaview